Model Talk
NIGHT MODE
DAY MODE
Brent Grant's putting
Given a golfer who has averaged -2.8 (adjusted) strokes-gained putting per round in 4 previous rounds, what would you predict for their next putting performance? At this week's Sony Open, Brent Grant is this golfer, and our model estimates his putting skill to be -0.72 strokes per round. Given that the standard deviation in putting skill on the PGA Tour is around 0.24 strokes, this puts Grant 3 SDs below average and solidly in the worst percentile of putters on the PGA Tour.

My first reaction to this was that it seemed much too harsh; putting is random and 4 rounds is a tiny sample size — surely we are updating too much! While we don't have much detailed strokes-gained category data on Grant (just 4 rounds), we do have a lot of other data, which led me to my second thought: maybe what happened was that Grant had a very low overall predicted skill level (based mostly on his non-Shotlink rounds), and from that the model inferred that his putting skill (along with skill in the other categories) must be low as well. However that's not true either: we estimate Grant's overall skill level to be around -0.83 strokes.

Therefore we are left with the fact that the model is predicting Grant's next putting performance to be -0.7 (adjusted) strokes per round based mainly on his previous 4-round putting average of -2.8. To get a sense of whether this is reasonable, below I've plotted a golfer's putting performance in their 5th Shotlink-measured round against their average performance in their first 4 rounds. The data that I had most readily available went back to 2013, and this left me with 1023 golfers. There were only 7 golfers with a lower 4-round average than Grant's -2.8. 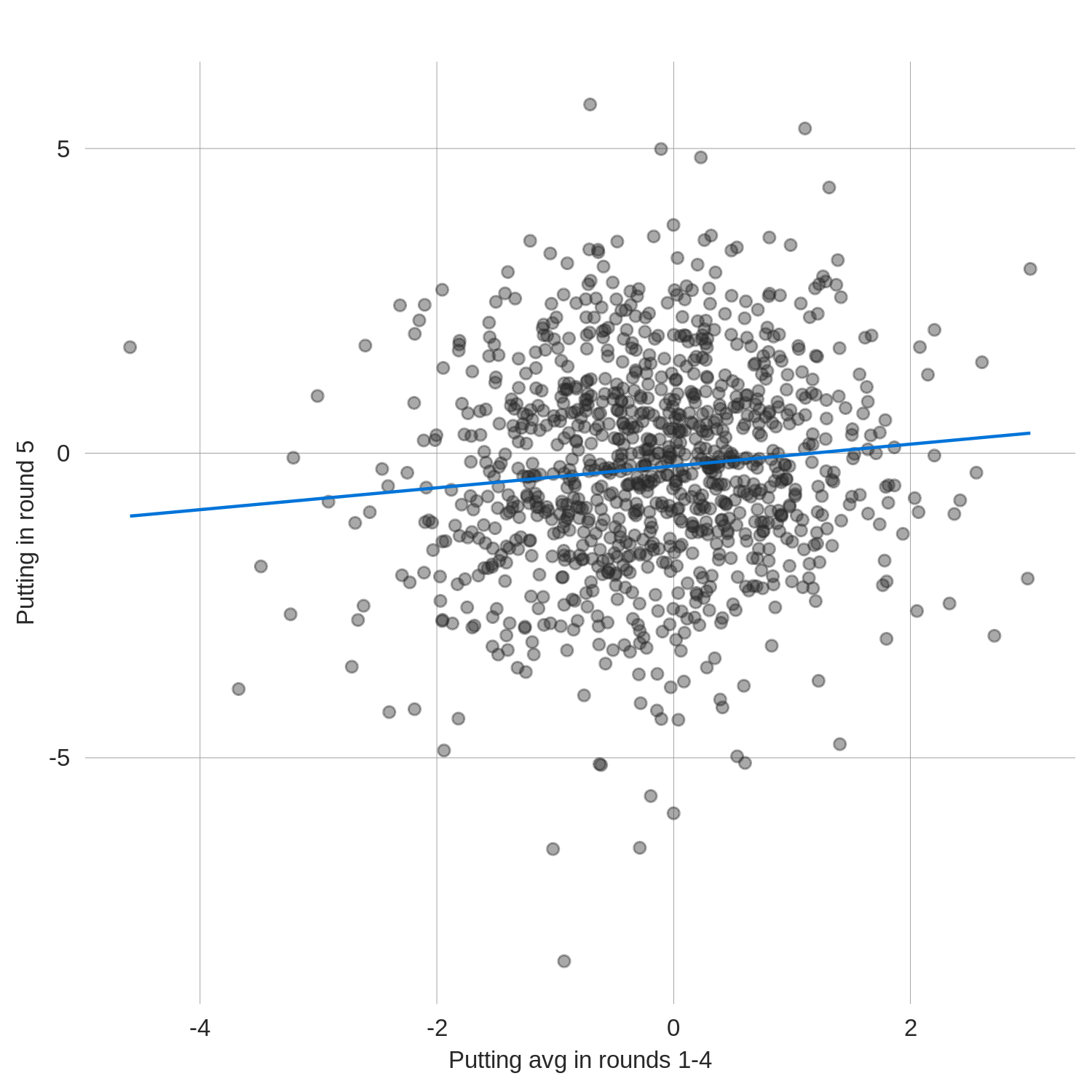 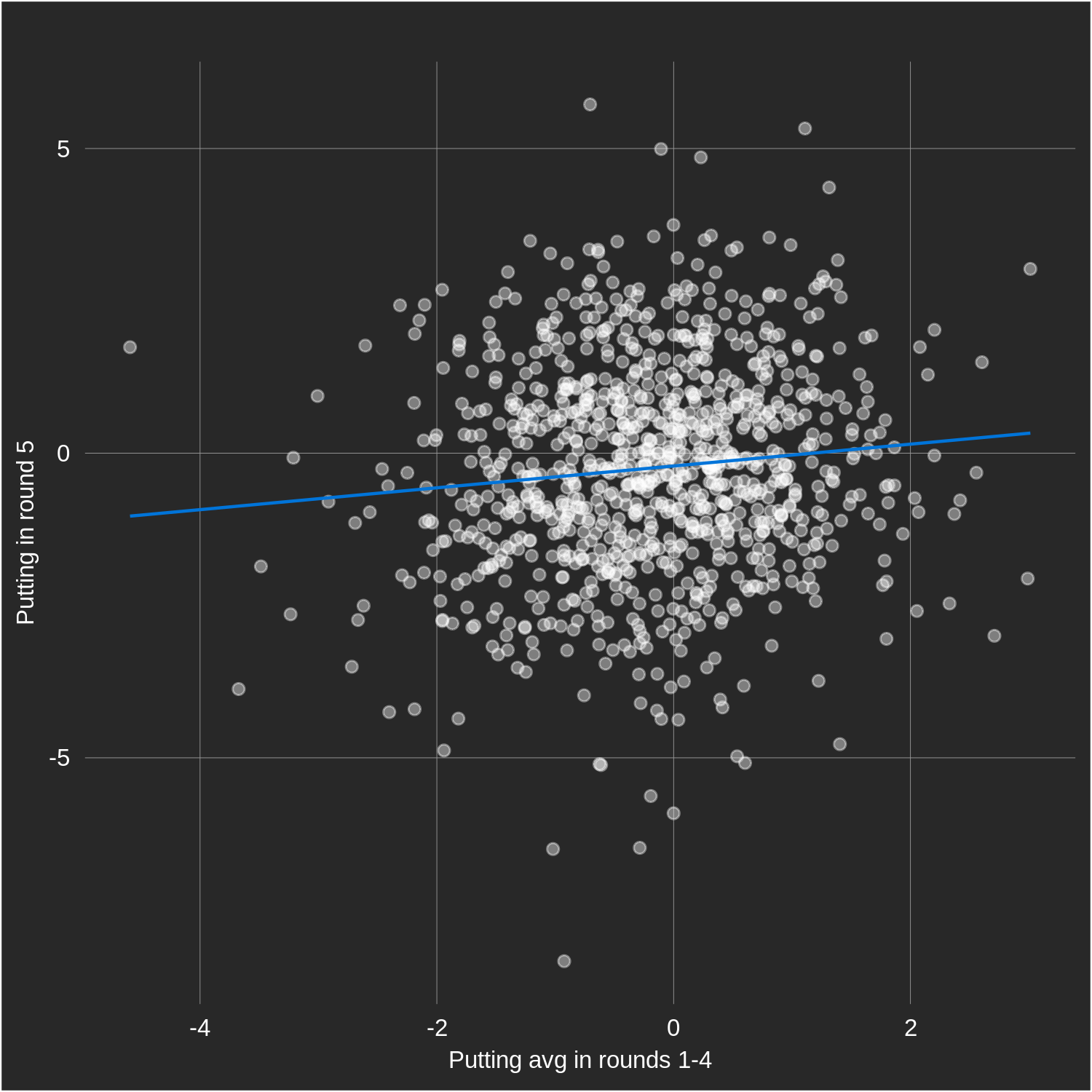 (Exercise for the reader: think about why the intercept here is slightly negative). As it turns out, the predicted value at -2.8 is exactly -0.7 strokes! This isn't that surprising, given that our model uses a similar method. Doing this same exercise for SG:OTT, SG:APP, and SG:ARG yields predicted values at -2.8 of -1.48, -1.12, and -0.88. Again, as you would expect but still interesting for me to see how much we learn from just 4 rounds of golf! The broader lesson here is that it really doesn't take a lot of data before you have a good sense of someone's skill level.

However, I'm still a bit unhappy with Grant's putting prediction of -0.72. As mentioned above, we are predicting Grant to be a -0.83 player overall. It seems unlikely, but of course not impossible, that a player of this caliber (-0.83 skill would be an above-average Korn Ferry Tour player) is this bad at putting. Grayson Murray is a real-life example of this type of player, but he is a rare specimen. It's true that if the only information we had on Brent Grant's putting was that he had played 4 rounds averaging -2.8 SG per round, then our best prediction for his putting going forward would be -0.7. However, we know more than that. Therefore, the question is actually: given Grant's 4 SG putting performances, plus the fact that his overall skill level is -0.83, what is our best guess for his next putting performance? My hunch is that the answer is closer to -0.5; still really bad, but not historically so.

While an interesting problem to consider, this is largely inconsequential for our model's predictions. The only place a golfer's skill in each of the SG categories enters the model is for course fit considerations. (We use all available detailed SG data when estimating golfers' overall skill, but that doesn't actually yield a prediction in each of the SG categories separately.) We currently arrive at our SG category predictions by predicting golfer skill in each category only using their Shotlink rounds, and then doing a bit of a data-driven hack to ensure the categories add up to their overall skill (which is the quantity we are most confident in). Obviously the more Shotlink-measured rounds a golfer plays the less the issue outlined here matters.

Needless to say, I'll be very interested in Brent Grant's performance on the greens this week.