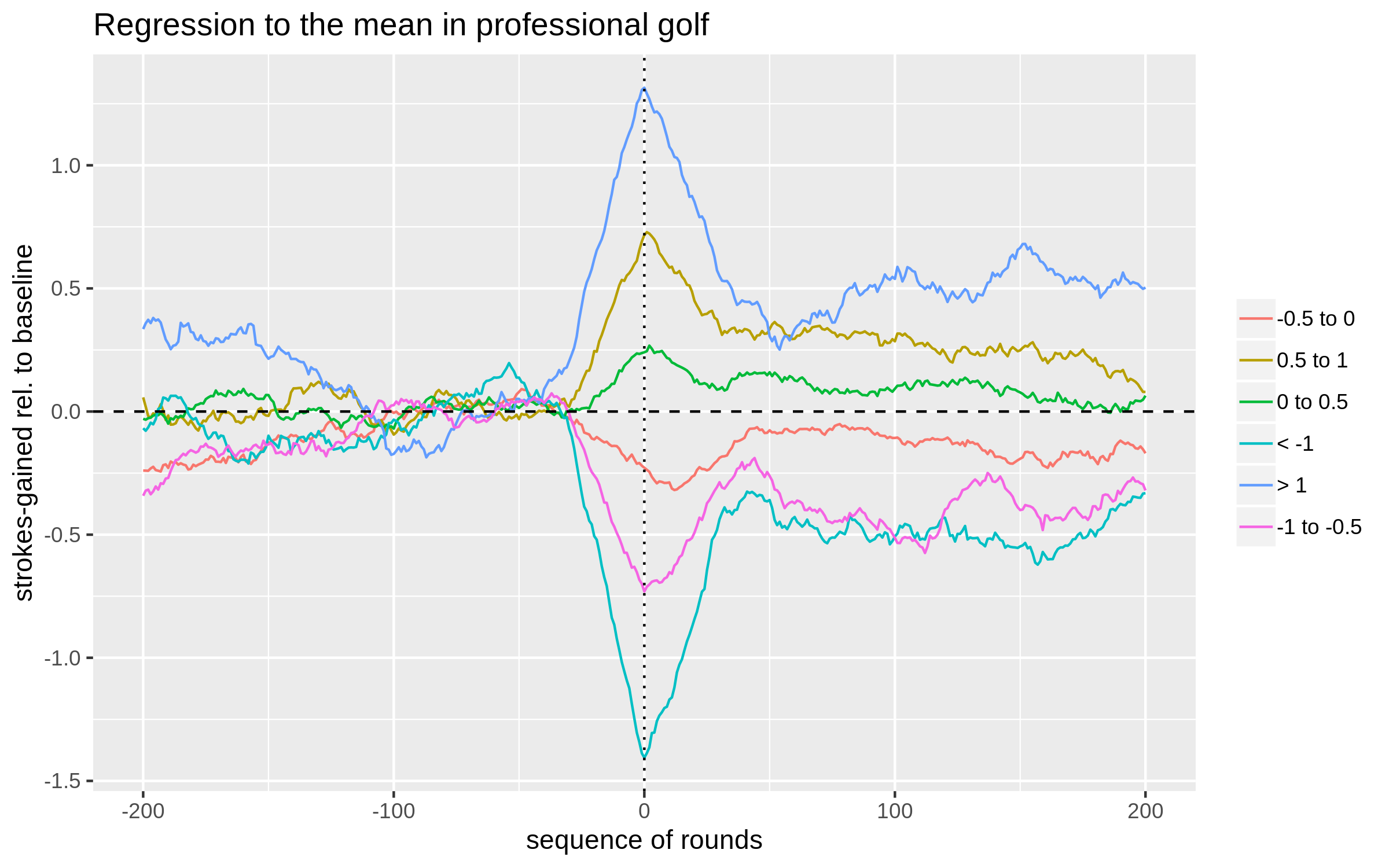 Notes: Data is from 2004-2019 on PGA, Web.com, and European tours. To be included in the analysis, a player had to have played at least 400 rounds and not be one of the players in our coaching sample. Point 0 on the x-axis represents a randomly chosen date for each player. Plotted is a 30-round moving average of strokes-gained relative to baseline, where the baseline is defined as the golfer's strokes-gained from rounds -130 to -30 on the plot. Groups are formed based off strokes-gained relative to this baseline in rounds -30 to 0.
An example for clarity: the blue line aggregates (i.e. it is the average of) all players who averaged more than 1 stroke per round above their baselines leading up to the (hypothetical) switching date. All groups cluster around 0 between positions -130 to -30; this is because each golfer's baseline skill is defined using this 100-round stretch. The main takeaway from the plot is that when a golfer deviates from their baseline for a 30-round stretch, we can expect about 30% of that form to be maintained going forward. The fact that we do not observe full regression to the mean indicates that the skill levels of professional golfers likely vary over time. That is, performing below the previously defined baseline for a 30-round stretch is in part due to "bad luck", but also due to a decrease in skill level (this statement is only true on average across many players). There are several things one could quibble about in this analysis, a few of which are mentioned here [4].
Now that we have a rough sense of the role of regression to the mean in golf, let's compare some of our control groups to the group of players that actually switched coaches. The next plot includes the average 30-round moving average for the 39 players who switched coaches alongside the two most relevant control groups from the first plot. 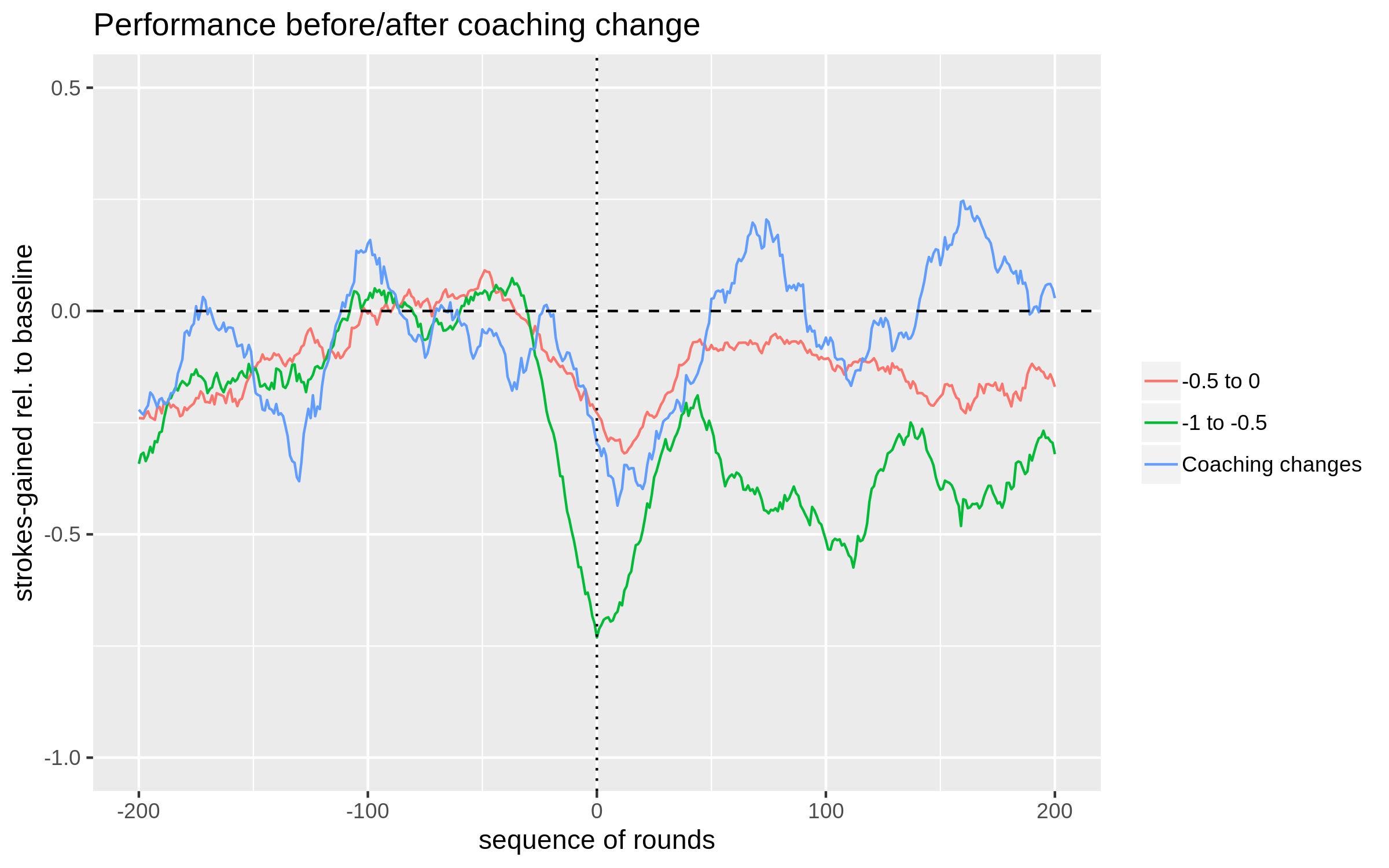 Notes: The plotted blue line is the (average) 30-round moving average for the 39 players who switched coaches. The green and red lines are the groups of players who averaged between -0.5 and 0 strokes below baseline, and -1 and -0.5 strokes below baseline, leading up to their "switching dates", respectively. The red line is the average of 154 golfers' performance, while the green line is the average of 85.
The plot speaks for itself, but I'll repeat it anyways. The control group of players that on average performed somewhere between 0 and 0.5 strokes below baseline leading up to their imaginary switch dates looks fairly similar to the actual-switchers (i.e. those who did in fact switch coaches) leading up to the switch date. After the coaching switch, the performance of the actual-switchers continues to decline for a brief period, and then steadily climbs and surpasses this control group from about round 50 post-switch onwards. In general, the moving average of the actual-switchers shows more noise because it is comprised of just 39 players, while the -0.5 to 0 control group contains 154 players.
There is a lot of statistical noise hidden behind these averages. To get a sense of where the performance of the actual-switchers fits in with what we can reasonably expect just due to randomness, we repeat the following exercise 30 times: from our full sample of golfers (those who played at least 400 rounds in the dataset), randomly set a date for a hypothetical coaching switch for each golfer, calculate their performance relative-to-baseline leading up to this date as described above, and then randomly select 39 golfers (the sample size of our coaching switch sample) who performed between -0.5 and 0 strokes below baseline leading up to the switch date. Put simply, we are going to repeatedly sample 39 golfers who were in performance slumps and then plot their performance in the subsequent 200 rounds. This provides a rough sense of how much the average performance of a group of 39 golfers can vary. The figure below summarizes the results of this exercise. 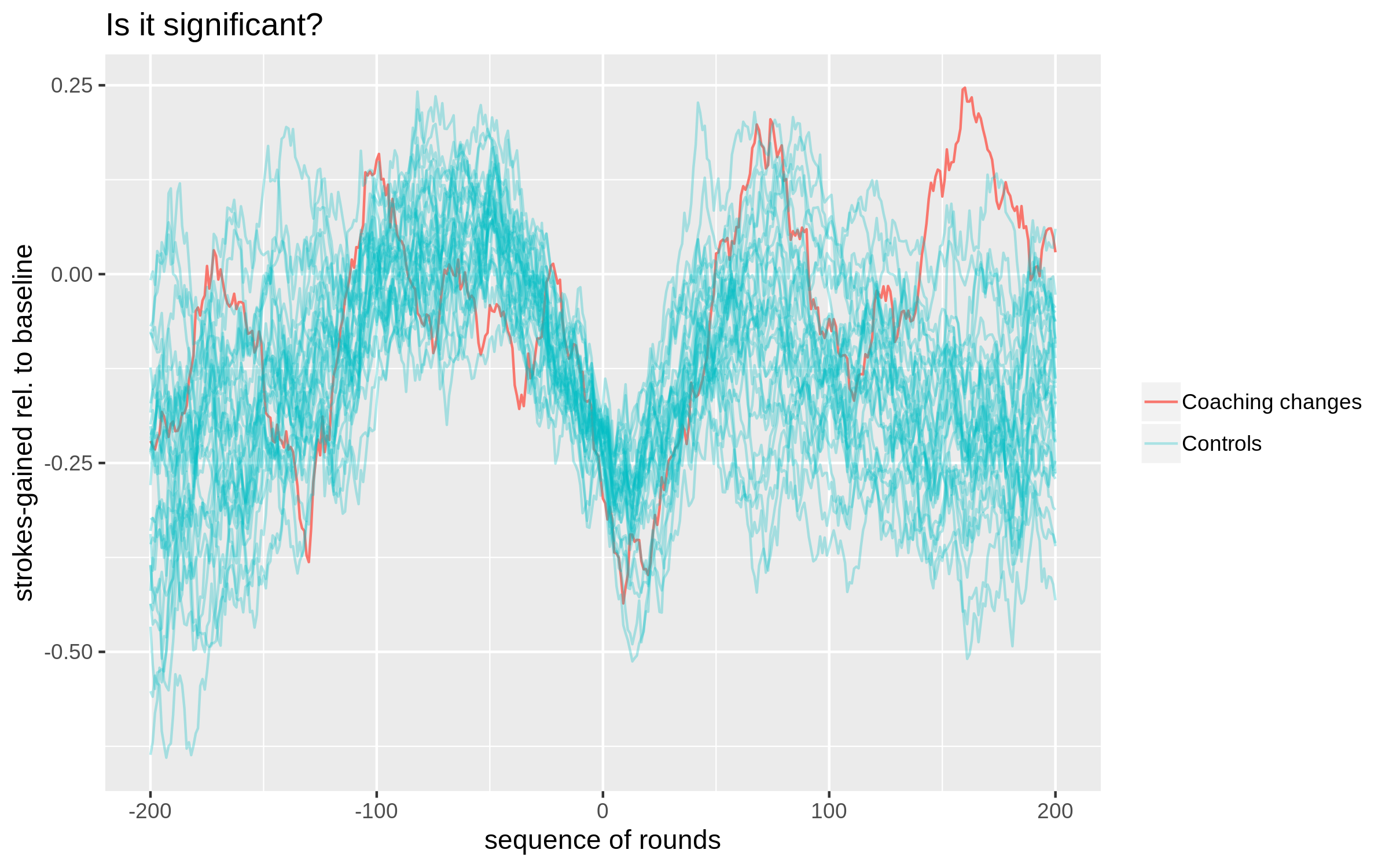 Notes: The plotted red line is the (average) 30-round moving average for the 39 players who switched coaches. Each blue line is the result of a single simulation exercise described in the body of the text. Some of the simulated groups likely contain the same golfers, but it's very unlikely the same date would also have been chosen. Taken together, the cloud of blue lines is meant to give an indication of the variation in performance that is possible for a group of 39 golfers (who didn't switch coaches).
Before the switch date, our controls match the actual coaching switch group pretty well, which is by construction. This plot makes it a bit more obvious that we are also selecting on golfers' performance in the rounds from -200 to -130; in this specific case, golfers are more likely to have been underperforming relative to the baseline period. Moving to performance post-switch, we see that the actual switchers' performance is pretty middle of the road in terms of what is expected from rounds 0 to 60; but, from round 100 onwards their performance is in the upper tail of what could arise due to randomness alone.
So, what to conclude? I would still be hesitant to say that this is anything more than noise. One point to think about is that once you start looking for substantial deviations in performance at any point from 0 to 200 rounds after the coaching switch, you are much more likely to find one. This is analogous to testing multiple hypotheses; as the number of hypotheses under consideration grows, the probability of finding a statistically significant one (when in reality no "true" effects exist) increases. That being said, the actual-switchers here are consistently near the top part of the control group distribution at every point beyond 100 rounds post-switch; it's not as though you have to isolate a single data point to declare victory here.
Relating things back to our original analysis, it seems that some of the improvement post-switch that we attributed to coaching can be explained by regression to the mean. However, the golfers who switched coaches do appear to bring their play back to a level higher than a similar set of slumping golfers who did not change coaches. As a final point, to satisfy the sticklers among you, it still is likely the case that our control group of golfers is different in some meaningful way from the group of golfers who switched coaches. After all, switching coaches is a decision; why one golfer makes that decision and another doesn't could indicate that they are different along some relevant dimensions which could correlate with future performance.
Endnotes:
[1] Under a deterministic worldview, lack of predictability always reflects lack of information. If we knew the position of every atom we could predict how a given coin flip would land; the fact that we view coin flips as 50-50 propositions reflects ignorance in the same way the coin-under-hand example does. This view of randomness and predictability seems the most coherent to me. [Back to text]
[2] This is not technically true if you look at the linked paper. However, you have to construct a pretty weird example to not observe regression to the mean without having perfect correlation. Certainly if the relationship between the repeated measurements is linear, the claim is true: think of regressing two variables that have the same mean and variance on each other; if the regression line has slope less than 1, then we have regression to the mean. The slope will only be 1 with a perfect correlation. [Back to text]
[3] It’s worth pausing for a moment to think more about the role of “luck” in our simple model of golf performance. Luck, as its used here, should not be thought of as only capturing chance events such as getting a bounce off a tree back into the fairway, but as any deviation in performance from a player’s skill level. Luck, in this sense, is what allows the best golfer in the world to lose to Tony Romo over 18 holes once in a while. It’s not that Romo necessarily got lucky, in the everyday usage of the word, to win on that day; more likely is that he just hit an unusual number of good shots. As for why he hit an unusual number of good shots, there are many stories you could tell (just think of the day-to-day variance in your own golf game for inspiration); the important point is that Romo’s performance on that day is not repeatable, and therefore we label it as luck. Statistically, luck is the part of a golfer’s performance that has no predictive value for their future performance. The reason why we observe regression to the mean is that the best performances in golf are due to some good luck. Of course, good performances are also due to having a high skill level, but given our definition of performance it must be that on average the top performers got lucky. Because luck, both good and bad, is not repeatable, the top performers will on average experience a worse draw from the luck distribution in their next round, thereby moving closer to the mean. [Back to text]
[4] The sample size of rounds used to define baseline skill and to define deviation from this skill were, of course, arbitrary. The larger the sample size for the deviation, the less regression to the mean we would observe going forward. You can also see that the groups who overperform in the lead-up to the switch tended to be "overperforming" at the start of the sample (and the opposite is true for the underperformers). This must be due to the fact when we select on large positive deviations before the "coach switch", we are also selecting on players who were underperforming during the period used to estimate baseline skill. [Back to text]