Analytics Blog
NIGHT MODE
DAY MODE
Who plays well at The Open?
— Using performance trends by golfer nationality to enhance our Open predictions
In the current version of our model, we assess a golfer’s suitability for a particular venue by focusing on their course fit and history. Course fit looks at the relationship between specific golfer skills and performance at the course of interest, while course history focuses on individual player histories. These two adjustments work well when we have many years of data to work off of, but as the amount of data from a given course shrinks, so too does our ability to make meaningful adjustments. In this post we take a broader approach to course-specific adjustments by examining performance trends by country, and then apply that approach to this week's Open Championship.

Most golf fans agree that players of certain nationalities tend to over or under-perform at events hosted in certain countries. There are several plausible reasons this could be true: a home-country effect — Australians playing well at events hosted in Australia, for example; or, the style of play of golfers from a certain country may not suit the style of golf courses in another — the first example that comes to mind is Americans playing poorly in the UK. By estimating nationality-country effects, we can make course-specific adjustments even when there is no historical data at the course of interest. Further, when there is historical data available, as is the case this week at St. Andrews, it’s likely that these country-based adjustments pick up elements of course fit that are missed in the skill-based course fit approach.

In addition to nationalities, we can look at the country-specific performance tendencies of individual golfers. For example, while on average American players haven't performed well in Scotland, Jordan Spieth has over-performed in his 20 rounds there. The tradeoff between using nationalities versus individuals is similar to the tradeoff between course fit and course history: the former increases the sample size, but relies on group characteristics to make individual predictions. Later, when making adjustments for our Open Championship predictions, we'll use the nationality-based estimate as a starting point, or prior, for our prediction of a golfer's performance on Scottish Links courses. Then, for golfers that have substantial Links histories, we move away from this nationality-based prior towards their individual performance records. The starting point for this analysis is to define a baseline to compare a golfer’s performance to. For that we’ll use our full model which includes course-specific adjustments. Therefore if a given nationality, or golfer, is over-performing relative to their baseline in some country, this over-performance is not due to the usual skill-based course fit considerations that should be captured in our model’s predictions.

We first focus on country-specific performances by golfer nationality; in addition to nationality we group golfers by their primary tour (with just two labels: PGA/KFT, or European Tour). This allows English golfers who play primarily in the US to have different country effects than English golfers playing in Europe. This distinction makes sense if you think performance differences across countries are influenced by the types of courses golfers are currently playing (as opposed to the types of courses they grew up on), or if you think travel impacts performance. We include all tournaments since 2010 on the PGA, European, and Korn Ferry Tours. Shown below are the largest positive and negative nationality-country effects: The rightmost column displays the 'nationality-country effects', which can be interpreted as our predicted improvement or decline in performance (in strokes per round) for players of that nationality/tour in that country. This estimate comes from the group's overall strokes-gained (relative to baseline) in the country, with more regression towards zero applied for smaller sample sizes. (For those interested in the statistical details, head to the endnote.) It's pretty amazing how well South Africans have played in South Africa; I don't know enough about golf courses there to posit why this would be the case, but with more than 3000 rounds played it's hard to argue against the conclusion.

Next the same calculations are performed for individual golfers; here are the largest player-country effects, after restricting the sample to players with skill levels above that of an average PGA Tour player: Plenty of interesting histories here. I'm surprised by that Lingmerth number, I thought his small stature would help him in the strong winds that come with Scottish Links. (That was a joke.. just in case.) Now let's apply this analysis to this week's Open Championship. To start, here is a snapshot from our country performance map that displays the performance by nationality at Open Championships since 2010. (There is a lot of interesting data to explore in the interactive version of this map, so I strongly suggest heading over). 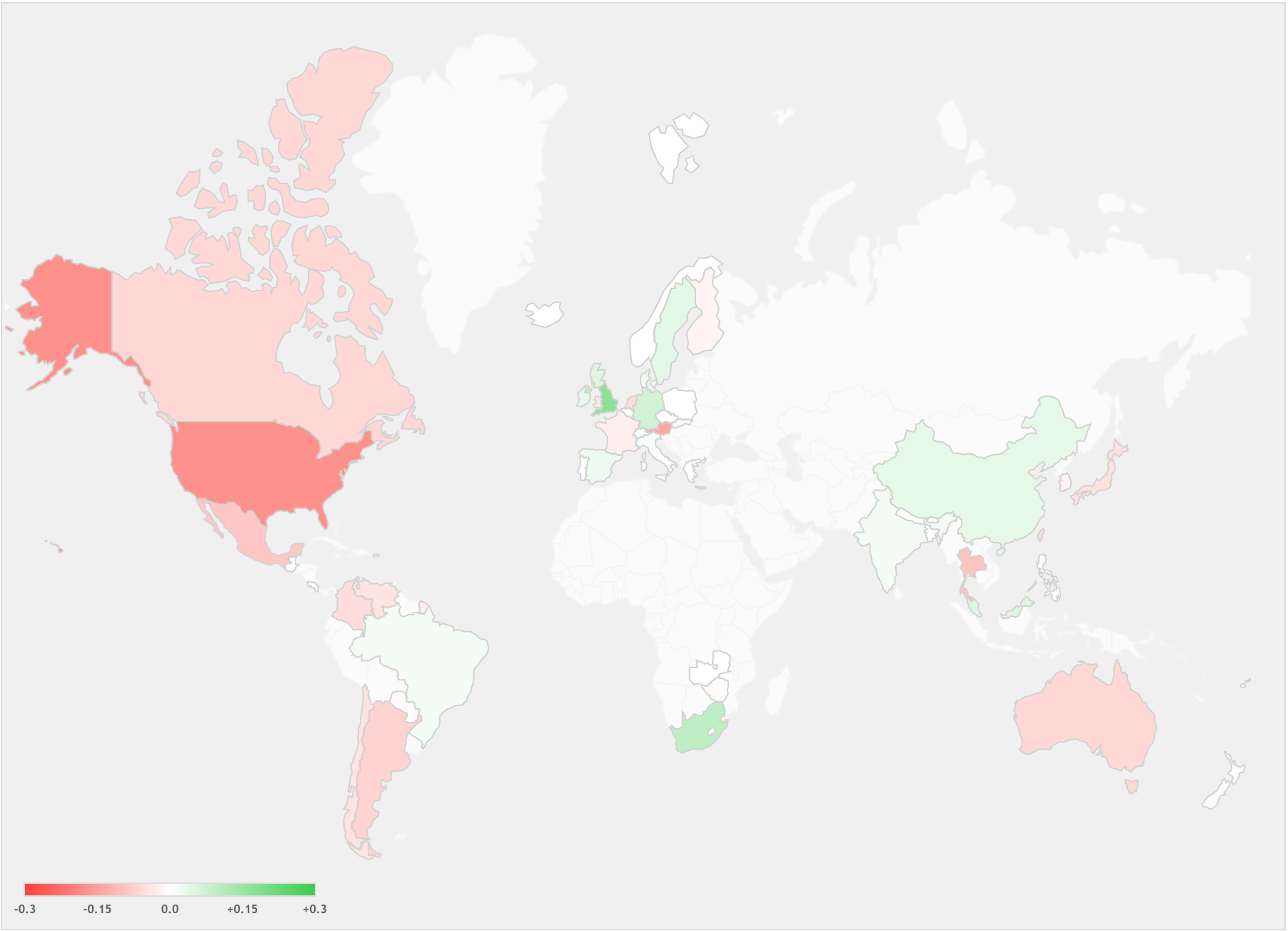 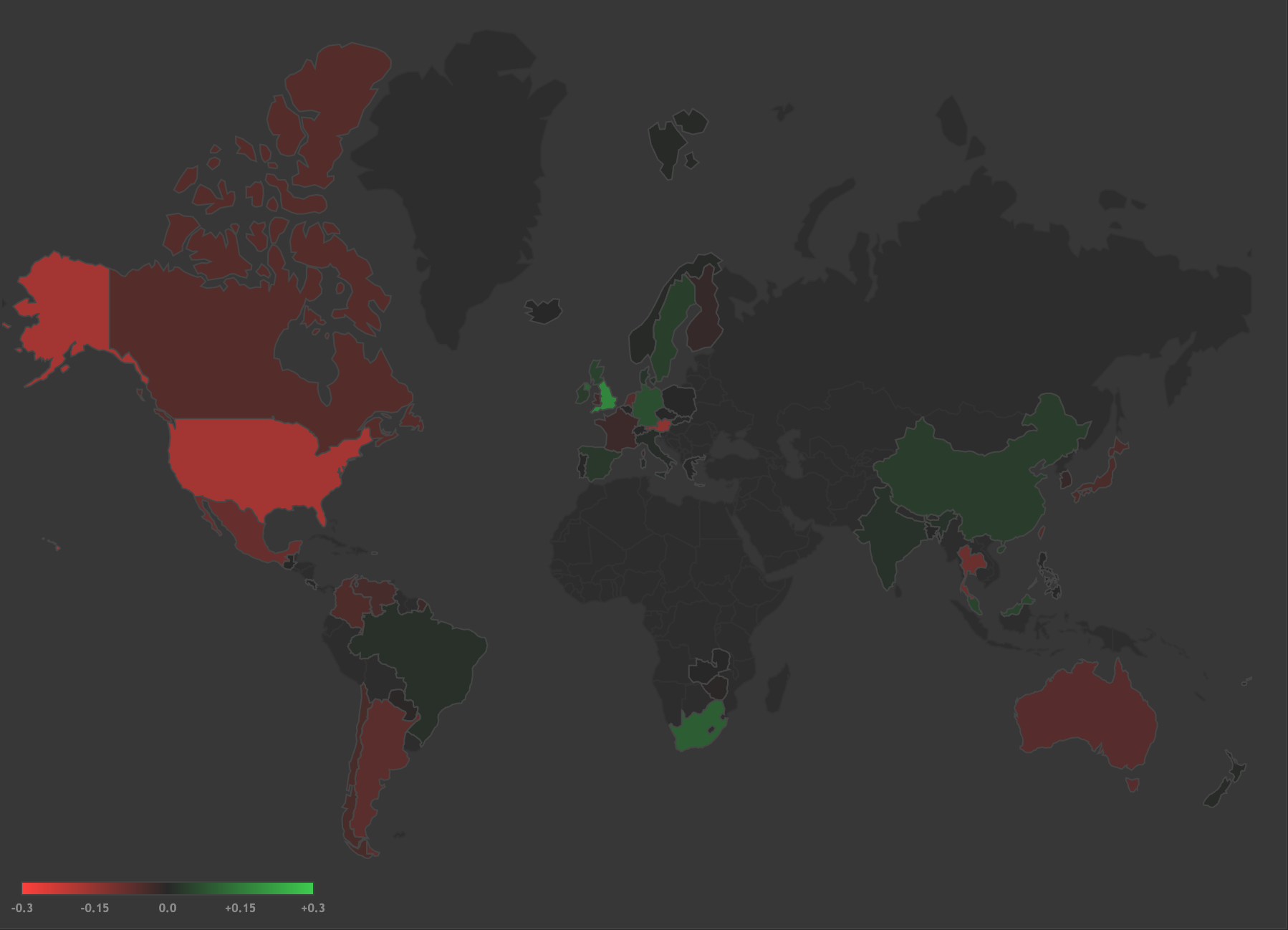 As expected, players from the US underperform substantially at The Open: we estimate that PGA Tour-based Americans perform 0.23 strokes below their baselines. Interestingly, PGA Tour-based Englishmen and Scotsmen perform worse at Open Championships, while their European Tour counterparts perform well above baseline (0.33 strokes for English players — the highest of any country). Australians have not played well at The Open, which might surprise the golf architecture crowd, although this estimate is driven the by play of PGA Tour-based Aussies.

For the Open-specific adjustments that we actually use in our model this week, we look at players' past performance at all Links courses in the UK in addition to Open Championships. All of the plausible explanations for why country effects exist (e.g. style of course, travel) should still hold with this expanded list of courses. To arrive at what we call our "Links Adjustment", we use the nationality-specific estimates as a starting point, and then update with individual player data from that prior. For example, a PGA Tour-based American player who doesn't have a Links history is given a Links adjustment of -0.24 — which is the predicted under-performance on Links courses for that group. For a player like Zach Johnson, who has over-performed in his 38 Links rounds, his Links adjustment will move substantially away from the American prior of -0.24. The table below highlights the Links Adjustment for some selected players this week, along with a breakdown of how we got there. Darren Clark is receiving the largest Links Adjustment this week at a whopping 0.56 strokes per round! The Northern Ireland baseline (for European Tour-based players) is 0.1, but what's doing most of the work for Clarke is his incredible Links history: 1.21 strokes/round above our model's baseline in 71 rounds. Combining the nationality prior with his history (this is a weighted average, with more weight applied to the individual history the larger is the sample size) gives a skill estimate of 0.46 ("Updated Links Skill" column), and then we tack on 0.1 strokes for Links experience to arrive at the final Links adjustment of 0.56. You'll notice it takes a lot of data to move away from the nationality priors; golf performance is super noisy, so even a 40-round sample is affected to a large degree by randomness. Billy Horschel has the lowest Links adjustment in the field, thanks to his abysmal Links record (-1.23 strokes relative to baseline in 28 rounds). Cameron Young has only 2 Links rounds under his belt, but they didn't go well. Horschel and Young will be looking to buck their personal Links trends this week, while players like Zach Johnson will look to continue defying their American expectations.
Endnote:
The basic problem here is figuring out how much to regress group (or player)-specific averages towards zero (which is the value we would expect the group's average to take on without any other knowledge). I take care of this with a technique called Empirical Bayes. In simple terms, in a typical Bayesian setup where the goal is to estimate some parameter of interest, you start with a prior which comes from your knowledge of the problem at hand; you then update that prior with your observed data, which yields a final estimate, called the posterior. In our context, that process might look like this: first, based on my knowledge of prediction in golf, a reasonable prior on these nationality-country effects might be N(0, 0.2). This means that if I could observe the "true" nationality-country effects for 1000 nationality-country pairs, I would expect nearly all them to be greater than -0.6 and less than +0.6. Second, I know that my data — SG performance relative to expectation — is (roughly) normally distributed with a mean of zero and standard deviation of 2.8. This is now a solved problem (the first section titled "fixed mean, random mean" is the relevant one). As that document shows, our final posterior estimate of the nationality-country effect is intuitive: it's a weighted average of the prior mean (zero) and the observed average of the group. The smaller is the prior variance (i.e. the more certain we are that these true effects cluster around zero) the more weight goes on the prior, while the larger the sample size for a group average the larger is the weight on that average. The 'empirical' part of Empirical Bayes just means that the prior itself is also estimated from the data. To do this, I look at the standard deviation in nationality-country averages for the largest 50 samples. (Technically, I actually need to look at differences between a given nationality's performance by country — it's easiest to understand why by noting that the US sample is 200K+ rounds and by construction will have an average near zero.) Then with some hacky adjustments that I can't bear to go into here, we end up with a prior standard deviation equal to 0.12. This is for the nationality estimates. For the individual player estimates, we use a prior standard deviation of 0.23. [Back to text]